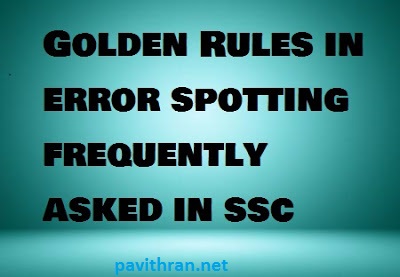 11. The sentence which starts with seldom, never, hardly, rarely or scarcely takes an inverse structure i. e. , ’ verb+subject’ structure. Inversion is also used in a sentence which starts with here, there, away, out, up, indoor, outdoor and main verb or auxiliary verb is used before the subject.
Ex: Seldom I had seen such a beautiful thing. (Incorrect)
Seldom had I seen such a beautiful thing. (Correct)
Away Sita went. (Incorrect)
Away went Sita. (Correct)

18. If the singular subjects are preceded by ‘each’ or ‘every’, the verb is usually singular.
Anybody, anyone, everybody, everyone, somebody, someone, nobody, no one, something, nothing, everything, anything and each are identified as singular number.
Ex: Every boy and girl were ready. (Incorrect)
Every boy and girl was ready. (Correct)

20. When a sentence starts with ‘the number of’, the noun it follows should be in plural form and the verb should be in singular form.
Ex: The number of girls in the playground are less. (Incorrect)
The number of girls in the playground is less. (Correct)
21. When the subjects joined by ‘or/nor’ are of different persons the verb agrees in person with the nearest subject.
Ex: Either he or I is mistaken. (Incorrect)
Either he or I am mistaken. (Correct)

100 Important Inventions and Discoveries for SSC,RRB and Other Competitive Exams

Download Rojgar with Ankit Math book in PDF for Free